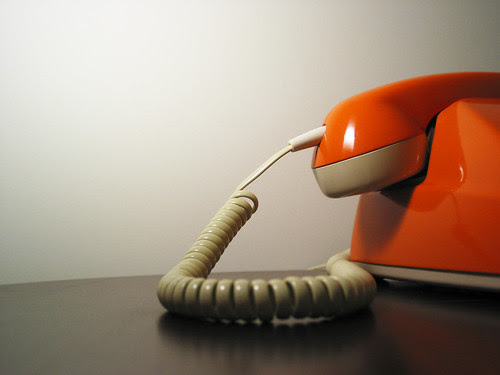 I don't know if this is an old person thing or a Southern thing or just a bad-mannered thing, but my mom doesn't say goodbye before she hangs up the phone. It drives me crazy.

There's an old guy that I sometimes have to work with (a competitor of mine) who does the same thing. I always feel like I'm in a race to say goodbye and get my end of the phone hung up before he hangs up on me. Because when you don't say goodbye to me before you hang up, that's what I get -- that you're hanging up on me.

For example, here was my conversation with my mom this morning:

Me: Your friend Ramona dropped that book by the office. (blah blah blah, we talk for 15 minutes about the book and other stuff)

Her: Okay, well I'll be by to pick it up this morning.

Me: Damn it. She did it again. Why can't she say goodbye before she hangs up the phone???

That's pretty much how every conversation goes, with me saying damn-it-she-did-it-again at the end.

Apparently, the phenomenon is also contagious. I was sitting at my desk and at the end of a phone conversation Rob had he simply hung up the phone.

Me: What happened?
Him: What do you mean 'what happened'?
Me: Did they hang up on you?
Him: (getting irritated) Nooo. Why are you asking?
Me: You did that thing.
Him: What thing?
Me: The hanging-up-without-saying-goodbye thing.
Him: No I didn't.
Me: Yes you did.
Him: No, I don't do that.
Me: You just did it. I'm telling you.
Him: I did?
Me: Mmhmm.
Him: Oh my God. I did it. I don't want to be one of those people.

And yet, he has done it on more than one occasion.

We were on the phone and when we finished the conversation he hung up. Damn it.

I called him back.

Me: You hung up on me.
Him: No I didn't.
Me: You're that kind of person now, the kind that doesn't say goodbye.
Him: Damn it.
Me: I know. Tell me goodbye now.
Him: Okay, bye.
CLICK

The phone rings and I answer.

I call him back.

The phone rings. I answer it.

I think we got it all out of our system that time.