The Glory of Behaving Badly 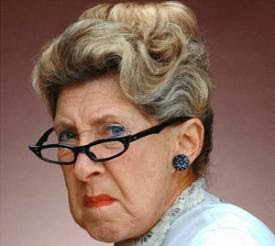 I have to wear reading glasses a lot now.  I'm not in the habit of always carrying them with me, because this problem of defective eyesight is a new one.  So I squint a lot or ask people to read things for me.  I remember always being frustrated with my mother when she asked me to do this for her, as if somehow she should be completely in control of how the muscles and lenses in her eyes work.  It's the arrogance of youth and I'm paying for it with newly-acquired remorse.

Along with said remorse, I also seem to have a higher level of "curmudgeonliness."  Either that or people are getting more obnoxious.  Or they are the same level of obnoxious and are embracing it more.

Take the guy who developed an addiction to rummaging through John Updike's trash. I suppose on one hand it's John Updike's own fault for hauling his garbage to the curb.  But to me it seems really tacky for this stranger who starts off by semi-stalking Updike at church to then forage in Updike's trash for things he could sell for significant amounts of money because the trash used to belong to a well-known writer.

And even that isn't the worst part.  The worst part is he goes on to describe in detail the entire process, how bad he felt about it, speculating that perhaps it was wrong and then leverages the article for publication.

This comes on the heels of the author who didn't like a poor review she got for her book. She subsequently stalked the woman who wrote the review, then wrote a long article describing how she probably made a bad decision, but wow, wasn't it interesting enough to get the story published in The Guardian?

My son just came in and asked what I was writing and I read him the title of the post.  He snickered and said, "Oh, I wonder where you got THAT idea."  He assumed it was about him and his brother and their antics. He's eleven and his brother is eight.  Unfortunately, no, I'm writing about grown adults who feel perfectly fine bragging about their bad behavior and capitalizing on it.  (And probably acting surprised when people react negatively.)

But in a way it does remind me of my boys. We have a "no burping at the table" rule and periodically when one of them wants to be outlandish they will let a giant belch rip -- one loud enough to vibrate the silverware against the plates. And then they snicker when I make the "mom face" because they think it is hilarious. They act up because they like the reaction. We do this when we are 11.  We should probably stop doing that somewhere around puberty.

Anyone who has a small grasp of history understands that the pendulum of social culture swings across the decades. I love free speech, freedom in general.  I love the wild permissiveness that fosters creativity.  I hate that we mistake bad manners and an inability to control our human weakness for freedom of action.  I can't wait for the pendulum to swing back to the place where civility is the norm and tacky behavior is not applauded as fine entertainment.

It's probably just the beginning of the end for me.  Not only do I have the glasses perched on the end of my nose, but I have the pursed mouth below and the glaring stink-eye of old-lady judgmentalness peering out over the top.

It's the trifecta of cranky grandma-face.