I was cruising around at MommyKnows and ran across her Save the Words meme. I'm not playing because I don't really like to do the tag memes because I hate to inflict myself on people. (Well, mostly.)

However, I couldn't resist adopting a word myself: 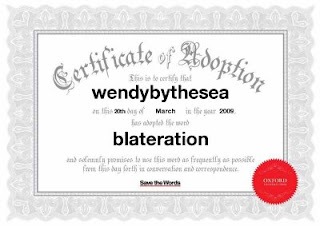 I was very torn between two words: blateration and pregnatress

Blateration was an obvious choice since blateration is pretty much all I do around here. My life is filled with it. Blateration, I mean. Because that's what we're talking about. Blateration.

However, pregnatress was definitely a big temptation. It means "female power that generates or gives birth to something". For example, "I am the pregnatress of this blog." However, the word kind of gave me a heavy, bloated feeling. I was worried it might slow me down a little. So, I will leave that one for someone else, but do hurry over and visit pregnatress at least. It's a big and powerful word, stoic and solid. It's trained not to jump on you and is fairly well-behaved. Its nose is cold and wet and it never whines when you have to leave it to go to work. It's a great word.

Blateration, on the other hand, is proving to be a little bit unruly. Fun, but definitely rambunctious. Wish me luck. Now, go adopt a word!