Two Weeks of Me

I'm adding something new to my life. You can read about it over at the latest post on Spread Change.

I've got a couple of funny posts in the works if I can ever get them done!
4 comments:

Just thought I would share a profoundly disturbing web site I ran across.

Take a heartwarming picture of a man and a baby, swap the heads around and VOILA... you have MAN BABIES. Go check it out so I'm not alone in my post-bizarro stress disorder. 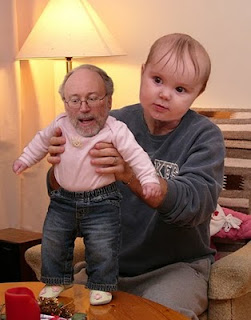 Recently on the phone my mother admonished me about my children's prolific use of the word "penis."

"You know you will be sorry one day about that word. One day they will use it in a way that will completely embarrasses you to death. Then you'll wish you'd never gotten that started."


* * *
The other day I was on the phone with a client discussing her impending closing which wasn't going very well. It's been a very long, protracted transaction full of twists and turns, bumps and bruises. My children were babbling in the background as usual. One of my ears was tuned into her, the other was listening to the Charlie Brown "wah wah" of my children droning.

And then I heard my client says, "Oh."

To which I responded, "Um, yeah. Sorry."

* * *
The boys and I were on our way home at the end of the day. One of the things I really enjoy about my oldest son is that he frequently has interesting observations about the world around him.  I love getting his perspective about the things he is learning and am often amazed at his notice of many things I take for granted. Child development is fascinating.

This particular day he was discussing the movie Avatar. We've not seen it yet as he is still 6 and isn't allowed to see PG-13 movies at the movie theater. (Sometimes he is allowed to watch PG-13 movies on video if his dad or I have pre-screened it.)

Julius said, "Mom, did you know what the guy who made that movie saw the whole thing in a dream he had -- the whole movie in one dream?"

"You mean he dreamed it and then made the movie?"

"Huh. I didn't know that.  Where did you hear about that?"

I glanced in the rear view mirror. "When were you watching Oprah?"

"Sometimes I watch it with Dad in the afternoon when he watches it."

I cracked completely up at the image of my husband and son sitting around the house in the afternoon with their feet up watching Oprah. I made a mental note to myself to mock my husband about it at the first opportunity.

Suddenly, Tristan, who had been silent the entire time, pipes up.  Looking over at Julius he says, "Stop talking to me."

(No) Help for Haiti

Snow. We got it. And in our awesome snow-boundedness, my stir-crazy six year old son decided to make a video with his personal plea for Haiti. Except he's not a videographer. Also, he's not particularly focused. What he does have is enthusiasm and a good heart, so that's a great start, right?

Without further ado, here is his debut as a spokesman for Haitian charities.