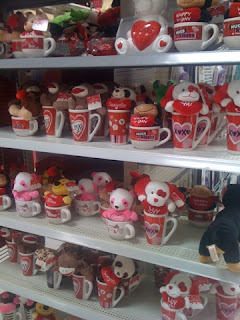 I found myself standing in front of a bunch of Valentine's Day crap.  Pissed.  And the only reason I was there was because I have kids who have parties -- it's certainly not because I like Valentine's Day.  In fact, quite the opposite.

Every year my ritual is to rant about Valentine's Day during the week of Valentine's Day. And friends who have known me for many years scatter like feral cats when they see me coming.

And I suppose it's ridiculous, because as holidays go it's rather innocuous.  Who wouldn't like a holiday that promotes love?

Except, the thing is, it doesn't really promote love.  Rather, it oppresses men and throws women into another arena where they compare themselves to each other to confirm how "worthy" they are in the eyes of those around them.

It's no secret that men say women are "complicated" or "tricky."  I've heard being in a relationship with a woman compared to walking through a room that is rigged with flashbangs -- you never know when you'll set one off accidentally, unwittingly. As a woman, I personally don't feel I'm terribly complicated but it's also hard to argue with the deer in the headlights look a man gets when you ask him if your ass looks big in the dress you're wearing.

And so comes Valentine's Day.  And on that day the man must go forth and procure for his lover some red or pink article that expresses just the right amount of love and creativity.  Too much and you overshot your mark (does that send a message?), too little and you're a cheap, uninspired bastard who doesn't appreciate your girl.  I don't envy a guy on Valentine's Day.

And for women -- imagine sitting in an office and all around you in their little cubes women are getting flowers delivered, or candy or tiny inappropriate teddies that they'll hate  And you're not.  Because maybe you're single. Or maybe your husband forgot it was Valentine's Day and is out in a leaky fishing boat with a 6-pack.  Or what if the girl next to you has two dozen roses and you have a little $3 box of off-brand chocolate from the dollar store that is half oxidized because it was actually left over from last year?

In my opinion, the whole day is trouble waiting to happen.

"But, Wendy," you protest. "Isn't the day really about the sentiment? It's the thought that counts."

I don't know... does an obligatory holiday that forces someone to buy me a present really quantify someone's love for me?  Are you buying it for me because you love me or because Hallmark says you should?  And, you are a kind person who doesn't want me to feel ridiculous when all my girlfriends get stuff and I don't.  Thank you for being kind, but maybe instead do something authentic for me like leave a funny note in the pocket of my jeans.  Or bring a 2pm snack by the office and say, "Hey, just wanted you to have this treat." Do it on a day nobody tells you to do it.

And let's do it for each other -- not just our lovers.  Let's do it every week for teachers or doctors or the lady who grooms our dogs or for the garbage man -- especially the garbage man, because his job really sucks.  Open your heart to anyone and everyone who ever made your life better.

I started to ask you to consider boycotting Valentine's Day, but maybe instead what I really want is for you to celebrate Valentine's Day every day of the year.