Not Your Grandmother's Tea Party 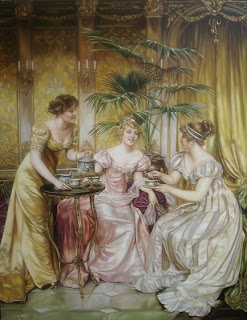 I come from a long line of tea drinkers. We’re an old American family who was kicked out of our country of origin for being rabble rousers, landing on American shores where rabble rousing is not only tolerated but pretty much celebrated as awesome.

My mother’s mother was one of those fancy women who traveled Europe as a young woman. Presumably she had tea and scones constantly. She always knew about the different sized forks. The napkins were always linen, never paper.  She insisted I know all this, too, and there were frequent tests on the matter as well as inspections because “you never know when you will be called to have dinner with the Queen.”

One should be ready for what comes one’s way, she strenuously maintained.

Growing up it was mostly just my mother and I. On a Saturday morning we might sit companionably at the kitchen table and share one slice of cake cut into tiny bite-sized squares along with mugs of tea. We’d play cards. Rummy.  I was twelve.

Later I would be hooked on decadent teas with rich half-and-half, loaded with sugar. That was my vice instead of smoking or drinking or having wild parties. A book and tea, my idea of heaven.

One of these people invited me to afternoon tea.

While I consider myself well-versed in drinking tea, I was really not experienced at all in matters of “afternoon tea.”  But she assured me it would be fabulous. We would wear hats, she said, and fancy dresses. There would be crustless sandwiches. It would be the perfect tea, an afternoon to never forget.

All of this was true. My friend did host an unforgettable afternoon tea. And there were crustless sandwiches. And hats. And fancy dresses. The table was spread with fine china. The forks were all in the proper places.

The hostess welcomed all of us and said we were to relax and our every need would be met by an array of servants who would be serving our fancy tea.

And with that she clinked her spoon against her glass and out came three men in various shapes, sizes and colors. All wearing French maid uniforms.

I glanced down at the end of the table to where the hostess beamed happily. She smiled at me and raised her eyebrows as if to say, “Aren’t you thrilled? Is this the most perfect afternoon tea EVER?”

I reached up to adjust the collar on my fancy dress and stared at a 6’4” 250lb man in a short skirt and fishnet stockings coming toward me. He had a tray of crustless tuna sandwiches.

“May I serve you sandwiches, my lady?”

“Oh yes, most certainly,” I said with a dainty pursed mouth. Because, after all, the sandwich would taste the same no matter what clothes he had on, right?

I glanced down the long table to the other women to see if anyone looked as shocked as I felt. Not a psychic ripple to be seen in the air around me. My lady friends, after being served by three men in drag, sat quietly munching fancy sandwiches and sipping out of china teacups. Pinkies up, of course.

The conversation was pedestrian. Not a word was spoken about the surreal nature of men in stockings and heels, of the juxtaposition of chest hair and lipstick, of tiny china cups held in large meaty paws with red, painted nails.

As a testimony to the adaptability of the human mind, in about ten minutes nothing seemed strange at all, as if every afternoon tea were served just like this.

And now when I think of afternoon tea, I smile because the manners I learned for my tea with the Queen were well-utilized that day and with some amount of perverse pleasure I think, “Oh, Grandma, you were right. One should always be ready for what comes your way.”
16 comments:

Exciting News: The Review is Born

I was going to write something fabulous here about my big news, but then my partner-in-crime Stephen Parrish did such a good job breaking the news over at his web site that I figured I'd just point you over there.

So, GO SEE OUR BIG NEWS!