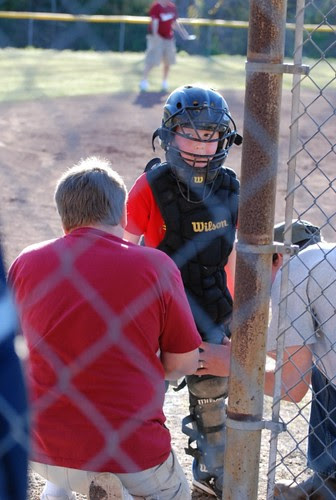 Tonight was the first game of my son's baseball season. His first "real" game.

I came armed with my good camera and the BIG lens, because I was certain that I'd be chasing Tristan all over creation. It would be okay because I have a 300mm lens that will get shots all the way across the field if necessary. (It turned out to be necessary several times.)

Things were going really well in the beginning. He talked to his brother. He picked up a cute chick. He looked at the moon. He laid down on the steps and tried to kill some old people. He balanced on some landscape timbers.

Really the only significant problem came when we ran into The Puddle.

The Puddle stretched across the entire sidewalk. There was no getting around it. Anyone who has experience knows that little boys cannot resist a puddle. No matter how well-behaved, no matter how stern and fearsome his mother is, no matter what you threaten him with... a little boy cannot leave a puddle alone.

I was pleased to note that he actually listened and obeyed the first time he saw the puddle and I said, "No puddles, no puddle, please!"

The second time he veered toward the puddle he also listened. And the third time.

The fourth time I think I actually saw the "aw screw it" switch flip like an inadequate breaker that can't handle the final demand of that last toaster you plugged in. And I watched as he ran in slow motion through the puddle and stopped in the middle, then looked back to smile at me.

He has a charming smile. However, at that moment that was really about the only thing he had going for him.

It's not that I'm such an uptight mom. (Okay, those who know me would say I'm a really uptight mom.) I'm an uptight mom who is learning to not get so excited about certain things like my kid being up to his knees in dirty water that might actually have flesh-eating bacteria in it. And did I mention his shoes are brand new? I simply say to myself, "No biggie, it'll wash." And then I also breathe into a little brown lunch sack that I carry with me. Sometimes I bend down and put my head between my knees. Pretty good, right?

On my left was a couple in lawn chairs. They were snickering. On my right was an old lady in a lawn chair who looked up at me wondering what I was going to do. I looked at her and shrugged. I could tell she did not approve.

Tristan ran the length of the puddle several times. A hum began to form in the stadium crowds. Everyone stared at my child who was wet nearly to his thighs at this point. I pretended I didn't know him. People were looking around trying to figure out where this child's parent was. The whispering increased. The hum grew louder.

A woman walked up next to the old lady next to me and said, "Oh my... I wonder whose child THAT is." The old lady's head snapped around to look at me to see what I would do.

I glanced over and said, "That would be me. That's my child right there." She stared at me like I'd gone mad.

You know, to me it genuinely didn't seem like a big deal. This is why I think I've gone a little haywire because it probably SHOULD have bothered me. What bothered me most was the rain of disapproval I was getting. That was when I snapped. Just a little.

At the top of my voice I said, "Yessirreeee... that puddle stomper is my son. But YOU KNOW... once a kid is in the puddle he's full committed and you sure can't unring the bell can you? Wet is wet."

Then I might have actually cackled. I'm not sure about the last part, but I think I might have.

Here's a view from the sidelines: