Recent Conversations with My Family

Tristan, an energetic and willful newly-turned-three-year-old
Julius, a smart, befreckled seven-year-old who is only a foot shorter than his mother
Rob, the loving husband who is a great cook and fix-it guy, but accident prone
Wendy, the harried, but well-meaning mother

Wendy explains in the most clinical and least-gross way possible about skunk roadkill.


* * *
At school pick-up, Dad learns Julius got in trouble again for talking in class. Mom is on the cell phone.

R: So, tell me the news for today.
J: (downcast) I pulled a card again...
R: For talking?
J: Yes...
R: Wasn't the teacher moving you?
J: She did move me.
R: And you STILL got in trouble for talking?
J: Yes.
W: Tell him I'm going to have to put a clothespin on his tongue and he can wear that to school. Maybe it will help him remember about the talking when all he can say is, "Buh buh duh bub dub buh."
R: Mom says we're going to put a clothespin on your tongue.
J: What's a clothespin?
R: Honey, he doesn't know what a clothespin is.
W: Seriously? Man, I feel old.
R: It's like a chip clip, sort of. Only smaller.
J: Oh, I've put a chip clip on my tongue before.
8 comments:

"He's so cheap he wouldn't pay a nickel to see the Devil ride a bicycle!"
11 comments: 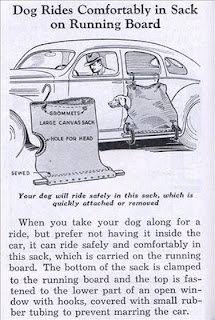 Supposedly this is an ad from a 1936 Popular Mechanic, but I'm hoping it's just one of those jokes that is going around the Internet.
18 comments:

Now Taking Applications for the Adoption of My Mother

Last week I had to drive to a nearby town with my mom to do a quarterly in-service for CASA. The plan was to make the 40 mile drive to a St. Peter's Episcopal church, eat the food provided, learn about this quarter's topic (which happened to be drug addiction) and survive another 40 miles home through various speed traps and curvy roads.

We went in mom's smooth riding car and she asked if I wanted to drive. I was shocked since I'm a real granny behind the wheel (some of this you know from the last road trip we took). About halfway to our destination I realized I hadn't printed out the directions. I assumed mom would know where we were going since she's a savvy neighboring city visitor, so I was surprised when she said she had no idea.

Only half-joking I said, "Oh, I thought you knew everything."

I shrugged. "I think I know where the church is. If I can't find it I will just call Mary." (My brother's girlfriend who grew up in that town.)

About 20 minutes later we pulled up to St. Joseph's Catholic Church and I realize I'm definitely in the wrong place. I called Mary. "Hey, Mare, did you know St. Joseph and St. Peter are two different people?"

She laughed, "Well, of course. One is Catholic and one is Episcopal." I thought about that one for a minute and couldn't decide if she was kidding or not. I then asked for directions, not knowing she's one of those people who just aren't adept at giving directions. So, I ended up staying on the phone and she "flew me in" by way of "Which street are you crossing now? Okay, then turn right at the next one..."

We finally arrived and stood out on the street in front of St. Peter's. I'm sure we looked lost as we weren't sure which of the many doors to go through. Finally we saw a pregnant woman come out of the building, get something from her car and walk back. It was a CASA sign, so we followed her at a non-stalkerish distance.

Within moments, people began filing in and we got our food and settled at a table with other people we knew. At the height of the hubbub, talk turned to a particular local doctor and why none of us want to go see him. Everyone took turns telling their Dr. Smith stories.

Mine was about the time my oldest son was terribly sick for the very first time. I was a new mom and Julius seemed very ill and I couldn't tell if it was just a cold or something more horrible that would require antibiotics. (In retrospect, being a veteran now it seems silly to have taken him in at all, but it's a new mom thing.) Dr. Smith looked him over and told me he thought it was just a cold and let it go for a few more days and if it didn't get better I should bring him back.

I said, "Okay. So, you don't think he needs antibiotics then?"

Dr. Smith said, "No, but I will give him some if it will make YOU feel better."

Needless to say I was mortified and haven't been back since.

My mother is a natural born story teller. She's a magnet for the strange and bizarre, although in her case these are frequently unfortunate and disturbing. She begins her tales of Dr. Smith by describing the time she threatened to punch him while he was in rounds at the hospital and he threatened to counter with some tae kwan do.

Her second story describes a visit in which, horribly ill, she sat on the table in the exam room and the first thing Dr. Smith does upon entering the room is say, "You REALLY must do something with your hair..."

It would have been great for her to stop at that point because they were two really awesome and really funny stories. But no, she had to go further by telling one more story which happened to be about me. While I love my mom's stories, I prefer them to be just about her and her own life. I say this realizing how hypocritical this is of me considering I'm writing this about someone else and that most of this blog is about me writing about other people and the things they do that I witness. I'm not sure how to resolve the hypocricy other than to say, "Oh well..." and then just move on to the part where my mom humiliates me in public.

For this story she must delve back to the year 1984 to one of my first serious miscalculations in the romance department. I put my fork down and stop eating because I'm pretty sure I know where this is going.

"You see, she met this boy and they decided to get married. Well, I took her down to Dr. Smith's office because we were thinking the best thing would be for her to go on the pill. And I wanted to explain to Dr. Smith that she was, well..."

She paused, trying to think of the best word. Her hands flapped around like startled bats as her brain kicked into overdrive. I sat there frozen, staring at a cherry tomato I had pushed to one side of my plate.

"She was, well... CHASTE. You know." Then she nodded vigorously to get some affirmation that they did all know.

I muttered, "Thanks, Mom." The formerly stone-silent denizens of our table erupted into laughter.

My mother then went on to finish the story about how she described to Dr. Smith my status as a "chaste person", and he said, "OOOH LA LA!" The table erupted into laughter again at which point everyone around us turned to see what they were surely missing.

She fumed as if the insult had happened just that afternoon. "I tell you what, I was so mad at him. I grabbed my daughter by the arm and dragged her out of there so fast. That old pervert."

The woman to my right leaned over and patted me on the back and said, "I think your mom is so funny."

My husband is an awesome cook and the other night he made a very fine something-or-other that we sat down to as a family, the four of us, just like a real functional TV family who doesn't normally keep clean laundry stacked on the table until it's time to put it away.

What I like to do when we sit down to eat is ask the kids about their day and engage them in open communication in an effort to prevent them from doing drugs and having unprotected sex. Sure, they are only 7 and 3, but I like to think ahead and the teenage years are right around the corner. Don't let anyone try to convince you otherwise.

But, unfortunately, asking kids that age isn't terribly productive and our conversations frequently go like this:

Me: So, Jules, how was school today?
J: Fine.
Me: What did you learn?
J: Nothing.
Me: Did you do anything exciting?
J: No.
Me: Did you have fun playing with your friends?
J: Yes.
Me: Anything you want to tell me? Talk about? Reveal about yourself so that I understand exactly what's going on in your mind at all times and so that we bond in a mother-son way, deeply, so that we have a continued good and healthy relationship so that when you eventually leave me to go out and have an life independent from me (despite all the dire warnings I give you beforehand) you'll call me on the phone every now and then and ask my advice on things and tell me how your day is going even when you are 20 and even though doing that is really uncool?
J: What?
Me: Nevermind. Tristan how was your day?
T: Good.
Me: What did you do today?
T: Eye no no... (shrug)

And so instead of doing that I talk to my husband. When Rob and I talk we chat about this and that and don't really take into consideration that the kids are listening because mostly what we talk about is boring work stuff and we assume they don't care anything about it and, therefore, ignore it.

On this particular day Rob was entertaining me with a story of something he did at the office that he classified as "stupid".  And in the telling of the story I didn't really think what he'd done was that stupid.  Maybe ineffecient, maybe the long (long, long, LONG) way around solving that particular problem, but I'd certainly not be as harsh as he was and call it stupid.

He ended the story by saying, "Anyway, that's why it seemed like a really stupid thing to do..."

And then Tristan pipes up and says, "Yeah, that's what makes you STUPID, Dad." And then he laughs raucously (because second to the word "penis", the word "stupid" is one of Tristan's all time favorite words).

So much for our dull work conversations being too boring for those boys.
9 comments: