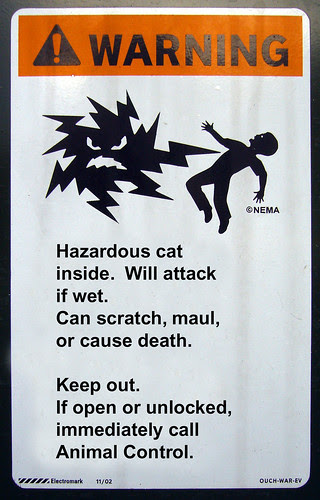 I've had this Ted Nugent song in my head all morning. I suppose I'm dating myself at this point, although maybe by now everyone understands that I'm a sedentary middle-aged mother-of-two who knows who Ted Nugent is. Although, honestly, I think I mostly know who he is because of my older brother. Does blaming it on my brother seem like a really pathetic attempt to hold on to my fleeting youth? (Oh come on, like you've never done it.)

The reason I have this song stuck in my head is because we are catsitting for my mom while she's on a road trip. We're watching her defective pound kitty that she's had for two weeks and he's freaking me out.

First of all, he's cross-eyed. So, he'll sit at my feet and stare at me with this vacant, cross-eyed look as if he's watching a gathering of invisible dead people behind me. It freaks me out. Then suddenly he leaps at me in what I assume is a gesture of affection but feels more like an attack from Inspector Clouseau's Chinese house servant, Cato.

Second, my mom brought him over injured. Just a few days after she took him home from the pound he ended up coming home looking like he'd been attacked by some wild animal or hit by a car or something. She thought he'd have to be put down, but didn't and has kind of mostly recovered except for this big flap of cat skin that, much to my disgust, periodically opens and closes revealing a gaping, seeping wound. Nice.

I got home yesterday and found the aforementioned skin-flap lying on the porch and was at first alarmed since now instead of peek-a-boo cat-meat we have 24/7 cat meat that appears to be oozing pus. However, overnight I've decided this might actually be a good thing. It seems to be repairing itself quicker without the fur.

My adult understanding, however, is not shared by Tristan who, while rolling around on the floor near the cat discovered the exposed cat-meat and started shrieking, in one of his more frequent moments of clarity, "MAHMAAAAAYYYYY, NEED YOOOOOOOOO!!!!" He was careful to point out Brutus's exposed cat-meat defect and I felt complimented that he thought I could actually do something about it besides dry-heave.

I told him I thought it was going to be okay and he was comforted enough by that to go on and eat some of Brutus's cat food and play in the used litter pan.

The boys have been wanting a cat and I'm hoping this will get it out of their system. I know that two days in it's already out of mine.

(For illustration you can see Tristan and Brutus fighting over a blanket and Julius deciding how close is safe to get to Brutus. How can a child be frightened of a cat?)