I Keep Telling Myself It's Not a Contest

Our oldest son is in kindergarten. We've never had a kid in school before so there's all this stuff you have to learn about ways parents must interact with the school culture, the teachers, rules and regs, etc.

One of the nifty things we've had over the last few weeks is "Moms and Muffins" and "Dads and Donuts" where the kids bring in a parent to participate in the hedonist ritual of sugaring up first thing in the morning. Then at the peak of the sugar high the parents get to thankfully leave the children in the care of the teacher who must then deal with the repercussions. (Anyone who says the sugar thing with kids is a myth is in on a vast conspiracy perpetrated by sugar producers.)

When I went to "Moms and Muffins" I was really delighted by it all. I got this gorgeous long-stemmed rose and a hand-drawn card with a cute questionnaire on the inside that was filled out by Julius and answered questions like "How old is your mom?" (100!) and "How tall is your mother?" (almost as tall as me) and "What is her favorite food?" (rice). My kid SO does not know me.

And then today was "Dads and Donuts" and it was pretty much the same routine without the long-stemmed rose. Dad got a cool hand-drawn card and the funny questionnaire except Rob's was not funny since Julius got everything right except his age. He is also 100 apparently.

But here is where it all went wrong. Where it goes wrong is when you compare the cards side by side. It becomes very obvious instantly that he loves his dad and he hates me. I will illustrate this below.

Here is the front of Rob's card: 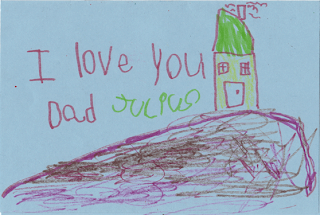 There you see our adorable little yellow house with the green roof sitting up on a hill with bats coming out of the chimney. This is close to real life except for the hill and the bats. Doesn't it look idyllic and lovely?

And even more touching is the back:

Here you see two smiling humans, Loving Dad and Beatific Son, walking through the black night. Dad has a big flashlight and guides them through the darkness. (The little red bits in front of the flashlight are lightning bugs.) See how they are holding hands? So precious. This is a drawing of an occasional ritual Rob and Julius have where they take a big flashlight and go "armadillo hunting" which consists of them sneaking around in the backyard to see if they can spy armadillos digging worms out of the ground. It doesn't involve any actual predatory behavior directed at the local wildlife. 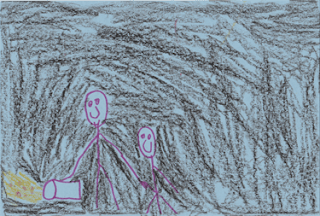 Moving on to Mom's card we begin to see a shift in attitude. See below:

See how the rain cloud pours 826 gallons per minute onto my son's head and then as if that's not enough see how that one cloud has its own special little lightning bolt that strikes my child in the side of the neck so hard that his whole body is enveloped in an aura of gold electricity?

Yeah, that's my sons interpretation of his relationship with his mom.