When you look in the dictionary under "unsolicited advice" there's a picture of my mother there.

Her favorite topics are medical advice, legal advice and parental advice. But she doesn't stop there. Pretty much she will embrace all topics. She's an equal opportunity unsolicited advice giver.

The other day Rob was having some problem with a sore place on his ear that wasn't healing up.

"Ask mom. See what she thinks."

Rob says, "No, I don't want to ask her because she's going to tell me it's a tumor."

"Don't be ridiculous. It's not a tumor."

At this point my mom walks in and Rob asks her to look at his ear.

She does and says, "That's exactly what Bill's ear looked like when he got diagnosed with cancer." I forgot that when she doesn't diagnose a tumor it's usually cancer. Her remedy was to go get Vicks Vapo-Rub and rub it liberally on his ear. It's a little known secret that Vicks Vapo-Rub cures cancer.

Her favorite thing to do is tell me how to raise the kids. She's raised three kids and was a tough-love kinda mom. Very loving, but very no-nonsense. Her chief complaint about my family life is that she says the kids run the house. This is what I hear all the time. "This is what I'm telling you... those kids rule the roost."

Tonight was interesting because she finally got to see the madness in action. Our youngest son is quite different from our oldest who is very easy-going and has been a relatively calm child. Our second seems quite high strung by comparison and I've remarked on more than one occasion that he acts sort of like he has an OCD. When he gets home from daycare he has a particular routine he follows and if we don't do that routine every day he completely falls apart. Tonight we get home and the routine is disrupted by two things: 1) the television he usually watches his show on is broken and 2) his blanket was in the dryer because he threw up on it the night before and it absolutely had to be washed.

Immediately when we got home he says, "Pooh Pooh Pooh" (his show) and I try to explain to him about the TV situation (a 2 year old, mind you) and tell him he'll have to watch his show on a different TV. He falls to the floor in the hallway and proceeds to freak out, crying and calling out for "Pooh". My mom immediately says, "Just walk away. He's just manipulating you." 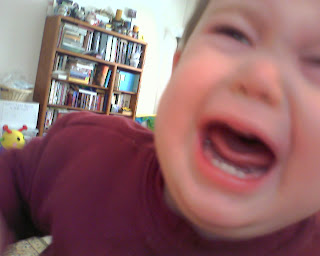 In the meantime, I figure if I turn his show on the living room TV maybe he'll get the idea and be distracted. This works except the next request is always either his juice or his blanket. He moans, "bee bee, bee bee, bee bee" (his blanket) and I then have to explain THAT situation at which point he melts down again. And more intensely. My mom's advice was, "He just needs to get over it. If he were my kid I would have paddled his bottom and given him something to cry about. He's just running your house you know."

After showing him the blanket was in the dryer, I got the juice (again hoping to distract him) which he started drinking and he wandered around the house very forlorn and every 20 seconds walked over to the dryer and pointed at it pitifully saying, "bee bee, bee bee, bee beeeeeeee...."

It only took about two times and she said, "Oh, get him his blanket. It's probably dry enough." BWAHAHAHAHAHA. She broke!

That's about one of the most satisfying things I've experienced today. Being petty is one of those little joys in life that are meant to be savored.

Okay, now is your big chance... is the baby OCD or is he ROR (ruler of the roost)? What's YOUR diagnosis? Just please don't say a tumor or cancer. (I'm out of Vicks Vapo-Rub.)