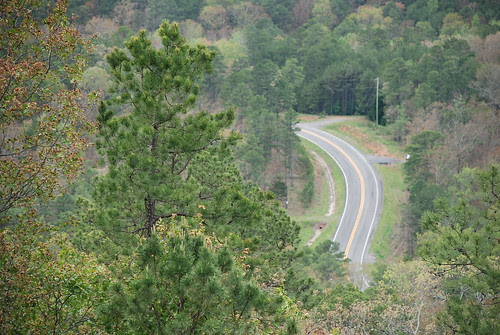 Today I had to drive to a neighboring town about 40 miles away. I don't go there frequently, 2-3 times per year, almost always for business.

When I was young, before my parents divorced and we all went our separate ways I lived in that town with my family. I have many memories, good and bad, wrapped up in the town. Sometimes when I go I like to drive to a place where I have a memory and look at the place with grownup eyes.

On the trip over, I had some chick music playing on the CD player and as I passed by "memory landmarks" I started thinking about how we tie vivid memories to certain places.

For example, in a small town between here and there is a narrow, two-lane bridge with no shoulders. Once when I was probably around 12 my mom and I were driving over to visit my brother. She had baked him an apple pie and it was sitting on the seat between us. As we were about to cross the bridge a fairly unskilled driver was taking up more than his share of the road and my mother swerved to the side and slammed on her brakes. The pie shot forward and landed upside down on her foot. I remember her flying out of that car yelling, "I just made that homemade pie for my son. I don't care that we're in the ditch... LOOK AT MY PIE!"

Every time I cross that bridge I have the image of that pie upside down on my mom's foot.

A few miles down the road I passed a small gas station. I remember stopping there with my dad once. I was probably close to 10 years old. My parents had already divorced and it was one of those rare visitation days. I remember my dad had Conway Twitty on the radio and he stopped in at the store and had me wait in the truck. He brought me back a Chick o'Stick which I'd never had before. He loved them, my mother told me later.

I passed an old non-chain hotel at one of the two stoplights in town. In my mind I could see in the little office and wondered if the same lady worked there who was there when I was 17. I used to drive my grandmother to that hotel and she'd take a stack of Harlequin Romances inside and trade the lady for some romances she'd not read. Straight even trade. Then I'd take her to Sonic for a chicken-fried steak sandwich, her favorite. We'd sit in the car and make small talk. Life was good.

There is a huge bank in town. There used to be a Piggly Wiggly there. Once a friend and I walked from my house to the park. We had peanut butter sandwiches wrapped in aluminum foil and we ate them on the way. We rolled the foil up tight and held them in our fists and said if we were attacked on the way we'd pelt our attackers with aluminum foil because that would definitely hurt. I was probably eight or nine years old and only had half a brain then.

The park is tidy now, but back then the trees were more unruly, au naturale. Now they trim the branches off the trunks from the ground to about 2-3 feet up. Visibility is good. Today I walked past the hideout tree -- it used to be a huge tree that had branches that grew all the way to the ground. You could squeeze through the branches and inside there was a very large hollow hideout behind the branches. We loved being in there and you could look between the branches and spy on people who walked past. I loved that tree.

Across the street from the park to the north are tiny little postage-stamp-sized cottages. My grandmother used to live there for a short time before she left and went off to California, leaving me behind for good. Before she left we sat at the edge of her bed and she showed me how to address envelopes so I could write letters to her when she went away. She is the one who showed me about the magic of letters.

As the memories paraded by I thought about how simple they were. It's not like a marriage or a death or a violent incident or some amazing epiphany happened. Just sweet, sad, funny moments, but so vivid and long-lasting.