Does Anyone Else Want to Vomit? 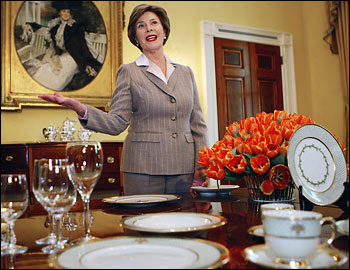 My first thought was, "Well, that really sucks for Michelle Obama, that thirteen days before a new First Lady is in the White House the outgoing Lady picks the new china." It seemed rude and sort of in-your-face.

One might argue that it's just fine and dandy to spend half a million dollars on china because it's from some historical society and it's not taxpayer dollars. However, I say it's heartless to spend half a million dollars on a luxury of that nature AT THIS TIME when people are losing their homes and when men are committing suicide because they get ripped off from investors and when innocent children are being blown to bits on a war that we watch every night on TV.

Let's step back and examine for a moment what half a million dollars can buy you:

The list could go on and on, but you get the idea.