Yesterday I had a business meeting in a very tall building. Tall for me anyway.

I don't know if I've mentioned it before, but I live in a tiny little town with one stoplight which acts not only as a landmark for giving directions but also as a landmark in the stream of time. "Well, I don't remember what year Calvin swallowed that toad on a dare, but I know it was before the stoplight was put in." 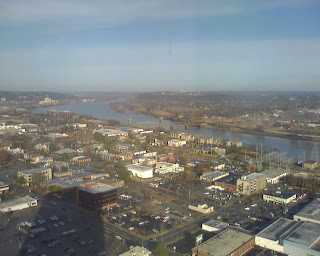 By the way, do you know how much stoplights cost your city? Lots of money. I know this because I was just at a city budget meeting that ran until midnight, a meeting with a dozen bleary-eyed people allocating millions of dollars fueled only on holiday sugar cookies and baklava. I think if the citizens of a city know their politicians are working on the budget late into the night they should take shifts hauling in soups and strips of bacon and very large grande mochas to make sure bizarre things don't happen such as designating money for an electric trolley that nobody ever rides.

Which brings me back to the 29th floor where nothing stands between me and a violent impact with the earth below except about half an inch of glass. I found it fascinating to gaze out over the city from here as this is rarely my perspective.

The city I was in was not particularly beautiful. A river runs through it and most of the buildings are low, sprawled across the land as if they are amassing for some sort of future event in which they rise up and become beautiful and sophisticated partygoers, shucking their sad demeanor for something better. It just hasn't happened yet. 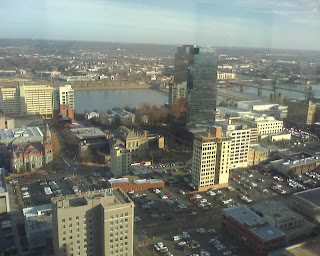 I was struck by how shabby buildings often look from the top. From here you can see vents and pipes and heating units, spindly cell and microwave towers, tubes that burp toilet exhaust into the air, half-full (or half-empty) dumpsters. These are things I never notice from the ground.

From here I feel like a voyeur. I see a black sports car driving around the parking deck. Undoubtedly the man inside considers himself alone, but I know better. My eyes wander from car to car crisscrossing the grid of the streets below me and wonder where they are going. I wonder how many times I have thought I was walking or driving in a city, thinking I was alone when actually someone on a 29th floor was watching me.

I love looking out to the horizon. Later I will explain to my oldest son about the horizon and the curvature of the planet and chuckle happily when he asks me if I drove to the end of the earth.

Nope, I stayed right here on the 29th floor in this room with the fascinating view, my back turned on everyone until my meeting started, a meeting filled with confusion, untruth, a meeting that created bewilderment and chaos in almost everyone who attended. And then a long ride in an elevator down to Level 5 (red) and a drive around a parking deck during which I thought I was alone, but could have been watched. And then a nice meal at a nice restaurant where a nice man gave me free green beans to make up for him giving my seat away and making me wait 20 extra minutes.

When finally seated, I mused over all that happened that morning, my eyes resting on the free beans and thought... in a bad economy you just can't beat free food (except maybe a big winning lottery ticket).