It's Small Town Snapshot Sunday! Read the rules and get the banners here. Be sure you include the link to your post at the bottom of this entry and also, tag your post "stss" or "small town snapshot sunday" so people can search for it and find you! THE LINKING MECHANISM IS AT THE BOTTOM OF THIS POST. PLEASE LINK TO YOUR ENTRY TODAY, NOT YOUR MAIN PAGE! Also, please be sure to link back to me so people can go check out all the other people who are playing. That's part of the fun, the small-town-hopping! If you can't get yours done exactly on Sunday, you can always backdate it!
This week Julius and I went out to do our Small Town Snapshot Sunday together! He took some of his own shots with our backup camera which I will post for him on his blog (which he rarely updates even though I bug him about it all the time and which will result in him needing a lot of therapy eventually).
I had to drive through this land for work. It's a managed timber area that has been harvested and replanted. 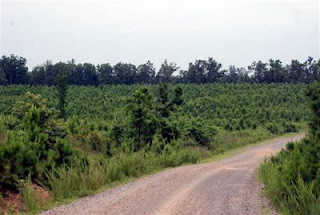 All along the sides of the road were blackberry bushes which are very hard to find these days but were plentiful along the roadsides when I was a kid. Too plentiful, in my opinion. In the summer I stayed with my grandmother while my mom worked and she was always giving me an old plastic ice cream bucket or a gallon milk jug with a hole cut in the side (handle intact) and would say, "Go pick blackberries so I can make Grandpa some cobbler!"
Back then nobody told you to wear sunscreen and I'd burn to a crisp and then have to endure her putting vinegar compresses on me later when she realized I was lobster red. 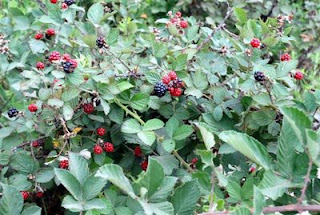 And I don't even LIKE blackberries. Or blackberry cobbler. 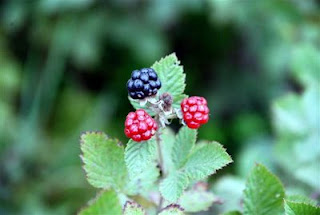 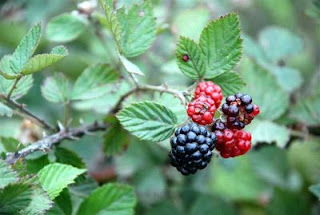 Strangely, Julius doesn't really care for blackberries that much either. I think because we've not had much success hunting for them. I have a client who has a beautiful thornless blackberry bush and we've grazed there before. One of the better batches I've had. I took a cutting home with me and killed it within a week. I wanted to plant them as a border between me and the fourplex next door to cut down my view of the transients while Rob is washing dishes. 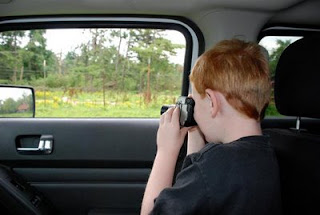 Julius was an enthusiastic photography buddy! 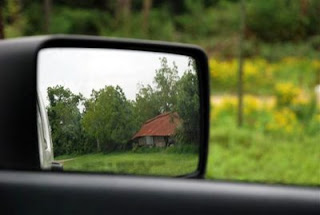 I, however, am sometimes lazy. I'd been in and out of the car so many times by this point I just tried to be creative from my seat inside the car. 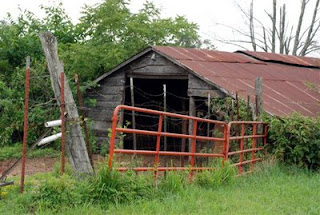 And I actually took this one without looking. I leaned over the passenger's seat across Julius while he was shooting one way and I shot backwards the other way. Not bad, considering. 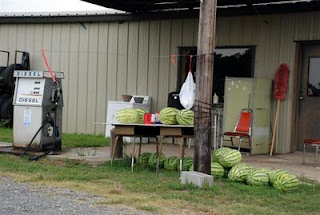 This was an old gas station that's no longer in service. It was surrounded by piles of firewood and old tractors. Someone had piled a few watermelons here with an "honesty pay" bucket. I love honesty pay vendors. There is one I pass frequently that sells honey and pecans. I always wonder how it works out for them. Well, I hope. I'd like to have continued optimism about the world in that way. 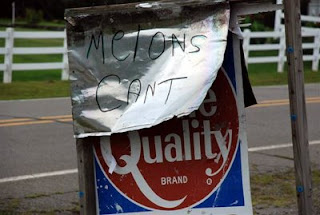 We didn't buy any melons because... melons can't. 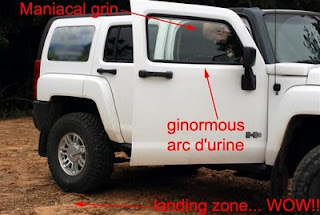 While I was out taking pictures I turned to see Julius taking a brief... respite. Just in time to see the big arc fly by the window. It was impressive. When I showed the picture to his dad he didn't think it was as funny. Maybe because Julius peed on his door. I don't know why he has to be so uptight about a little thing like that. I mean really!

I hope you're having an awesome Sunday no matter where you are!