How NOT to Clean Your Bathtub 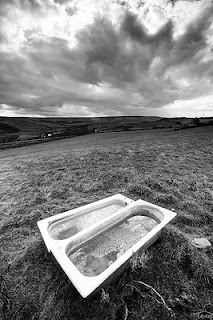 I have a great system for maintaining my tub/shower between weekend cleanings. After the last person gets out of the shower, but before the shower dries, I spray the entire shower and tub with Clorox Clean-Up. Since I've started this system I haven't had to scrub any mildew and soap scum out of the shower and my back and knees feel a lot better.  (Nevermind that I might be giving myself cancer from the chemicals or destroying the earth's precious biodiversity, but at least my shower isn't gross.)
This method, however, doesn't really work when you put two muddy, pollen-covered boys into a tub full of water. You still have to scrub the tub afterward since it pretty much turns the tub brown from that one bathing incident.
So, that Saturday, I had the brilliant idea that I was going to utilize local slave labor to clean the tub. I yelled out the bathroom door, "Hey boys! I have something cool for you to try!" Unsuspecting innocents that they are, they came running in bright-eyed and enthusiastic.
"Hey, how about you guys get in the tub and I'll turn the shower on and you can play in the water for a while. Oh, and scrub the tub while you're at it.  I'll get you the cleaning stuff!"
They clapped their hands together and pulled off all their clothes and jumped into the tub and wiggled and jivved under the shower water. They experimented with the various settings on the shower (from slo-mo to "aqua cannon") while I got rags and pulled out the non-slip mat so they could clean everywhere.
The quandary was what to use for cleaning supplies. I didn't want anything harsh on their skin, but I needed something with more oompf than water to get things sparkling white. I couldn't find baking soda anywhere in the house. Then I had this brilliant idea to use washing powder. It suds, it's a powder, so it might be slightly abrasive. I thought it was a perfect plan.

I took a big scoop in and sprinkled it around the tub and told them to rub it it all around. Then I went back into the kitchen where Rob was cooking to tell him just how brilliant I was. After I told him what I did he said, "That's really a bad idea."

The man was trying to keep me down. "How is that dangerous?"

Just then we heard a loud crash in the bathroom and I ran down the hall to see who had fallen. Julius was lying in the bottom of the shower flopping around like a fish that had found his way into the bottom of a fishing boat.

"Don't move, don't move. Just lie there a second and let me figure this out."

About that time Tristan started screaming, "IT BURRRRNS, IT'S BURNING MEEEEEE."

He tried to get up to show me where it was burning him and fell on top of Julius.  I tried to pick him up and couldn't hang on to him because he was so slippery.  Julius started flopping some more.  Tristan kept crying.

"Okay, okay, lemme rinse you!" Finally I got him just unslippery enough that he could stand upright if he didn't move much. I rubbed him down and got all the detergent off of him, THEN realized how stupid this was beyond the slipperiness because of Tristan's chronic exczema.

So, after nearly knocking one child unconscious and giving the other one chemical burns I got them both out of the tub, dried off and dressed. They looked relaxed, recovered and we all stood and admired their handiwork. The tub was perfectly clean and fresh.

As we walked out of the bathroom and turned out the light, Julius said, "That was fun. We should do that again."