A block or two from my house is our town cemetery. It's a sprawling strip of grass between the hardware store and the fire station and the old historic June's Cafe that's long-closed. It's encircled by a chain link fence that wobbles in some places with a gate that is wired shut so you can't open it and you have to walk around to the side where the hearses drive in.

The oldest graves are on the south end of the cemetery and over the years they have expanded toward the north end as the citizens of our town die and take their places there.

For my whole life the dominant feature of the cemetery was a tulip tree -- a mammoth tree nearly a century old. Every spring it would bloom into a resplendent display of yellow tulip-shaped flowers. It had been pruned at the bottom so that all the branches arched over the graves like a hovering guardian in a sweeping yellow coat. The tree was like an old friend that you didn't talk to every day but knew was always there for you.

Over the last few years we've had many weather disasters that necessitated our county being declared a disaster area nine times. One of the interludes between "major" disasters was a minor one -- a shearing wind that tore through town, pulled down a few electrical poles and as they tumbled down like dominoes they took our majestic tulip tree with them.

It was the talk of the county. Not only was the town without electricity for half a day, but the more tragic event was that our cemetery tree, our Old Faithful was split in two lying splayed out in an undignified manner right there in the middle of town.

The men came with chainsaws to dispose of the body and spent the day cutting the enormous tree into pieces. It turns out while she was huge and solid-looking, she was rotting from the inside. She was weak and it was just time and circumstance that came together to bring her down on that particular day.

The Wednesday following the tree falling the newspaper displayed, in full page color, the corpse of our tulip tree. It told the story of the tree and how it got there.


Long, long ago a woman died. She was so well-loved by her husband that next to her grave he planted a tulip tree for her so that every spring it would bloom and shower her with flowers. And in the summer it would provide shade to cool her. And in the fall it would blaze with color and make people take notice of her audaciousness. And in the winter, when she was bare, all would see the towering strength and the network of branches that had been looking over the cemetery for the last century. In some way, the tulip tree would make the dear lady immortal because when you drove through that part of town, that's what you could see -- the personification of a husband's eternal love for a wife who had gone before him.

I wonder when he planted the tree if he had any idea how truly huge it would get. It grew so large it split her headstone into pieces as if she were coming to life and breaking through from the other world to ours --  reincarnated as the tree itself. At least that's what I like to think. The notion is romantic and other-worldly and fantastic and I'm a sucker for that sort of thing.

I was there today and the cemetery looks so bare and lifeless without that tree. The rest is just expanse of grass and leaning stones, some of which are not even marked with names. On the stump sits the lady's stone, split into three and out of the stump grows a large pokeweed that is poisonous to mammals, although people in the south do eat it after cooking it to remove the toxins. Supposedly it can cure arthritis and other things if you can get reliable advice on how to cook it without killing yourself.

When I was a little girl I used to pick poke berries from a bush next to a bridge. I liked to smash the berries in my fingers and write on the concrete guard rails. I'd walk the rest of the way home, fingers bright purple-pink, remembering the feel of the rough concrete as my fingers slid across it making the shapes of the words.

I sat by the lady's grave today remembering all this and missing the tree that I've known my whole life.  I took pictures for you, so you can see all that's left.  I wish you could have seen her in all her glory. 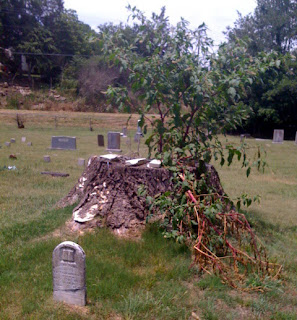 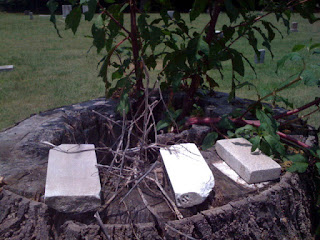