I Wrote a Book

Over the last year, I have been mostly-stealthily writing a book. A real live book with pages and a cover and a story that has a beginning, a middle and an end.  A novel.

I wrote a book.

I sort of feel like I have to keep repeating that sentence over and over because sometimes it doesn't seem real, even when I have an actual copy in my hands.

I wrote a book. But not without help.

Even though not very many people knew I was working on it, I was fortunate to have some good people in my corner of the ring.

In particular, my friend and crit-partner Stephen Parrish has my undying gratitude because he pushed and nudged and encouraged and cajoled and rolled his eyes when I was being ridiculous. And he told me stuff stunk when it stunk. And he didn't listen to me when I complained that I was tired or that things were hard. He always knew that morning would bring a fresh attitude.

I wrote a book that people read tirelessly. (And sometimes, I'm sure, tiredly.)

Fellow writers, friends, family members read the book in various drafts. And other friends offered expertise in other aspects. It's a better book because of their honesty and openness. Blowing kisses to Bee, Erica, Ginny, Jennifer, Lunaea, Sarah, Shannon, and Steph.

I wrote a book that looks and sounds like this: 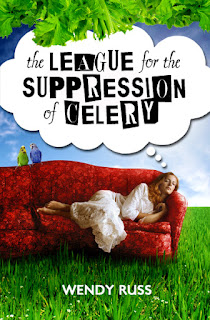 Kate Pearson heads west from Arkansas in an old jalopy with two parakeets, a job offer and a half-baked plan: Dreamboat celebrity chef Warren Hoffman has offered Kate a job – and himself – if she will relocate to Oxnard, California. The catch? Kate soon discovers Warren has a Big Secret. And that he’s possibly crazy.

During her journey, Kate stumbles into the lair of paranoid militants calling themselves the League for the Suppression of Celery. When they learn her destination is Oxnard -- celery capital of the world -- they stop at nothing to indoctrinate her into their nefarious cult.

Her escape from the League sends her racing toward her happily-ever-after while being pursued by members of the League who want her back, and by the compelling new friend who inexplicably quits his job to travel across the country to find her.